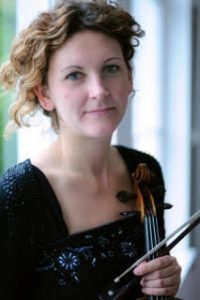 For seven years she was a member of the Scottish Ensemble with whom she performed at the Wigmore Hall, BBC Proms, and at the Edinburgh International, Aldeburgh and City of London Festivals, and broadcast regularly on Radio 3.

Fiona studied at the Juilliard School in New York where she lived and worked for 6 years. When not playing the viola she enjoys climbing mountains and recently climbed 6000m peaks in the Bolivian Andes and the Himalayas.

Fiona plays on an Antonio Gragnani viola from 1780 for which she gratefully acknowledges support from the Countess of Munster Musical Trust and the Loan Fund for Musical Instruments. She lives near Loch Lomond with her husband and two sons.